La Santa Muerte (“Saint Death”) is easily one of the best documentaries I’ve seen in the last couple of years. Santa Muerte is kind of like the personification of death; she’s usually portrayed as a skeleton wearing fine robes and holding a scythe. But she’s a version of death that watches over believers and can intervene on their behalf. The film documents the devotion to this figure in her native Mexico. In particular, the movie focuses on the shrine of La Santísima Muerte (“Most Holy Death”), which a woman named Enriqueta Romero Romero made out of her home. As the shrine has grown, Enriqueta—a featured figure in the documentary—has added a shop that sells Santa Muerte figures, candles, religious tokens, and other items for reverence and worship. She and her family also take meticulous care of the saint, changing her clothes on the first of every month, purifying the shrine with smoke and perfume, and holding a large festival on the anniversary of the site’s founding, November 1. Upwards of 5,000 people crowd the street in front of the shrine on that day, and the movie ends with this festival. It is truly one of the most interesting and unusual events I’ve seen captured on film.

(The following is from a SBS Dateline piece, not the documentary.)

The shrine is located in the Tepito neighborhood in Mexico City, which has a reputation for being one of the largest centers for crime and black market dealings in D.F. Not surprisingly then, the saint is known for being particularly favored by criminals, drug dealers, and the like. In the documentary, the filmmaker goes behind the bars of two prisons to show her popularity. Many of the prisoners in the film have shrines in their cells. One interviewee even paints large Santa Muerte murals for her fellow inmates in order to incur favors and to exchange for goods. But Santa Muerte’s popularity has spread beyond prisons and the criminal world. She’s also popular with the poor and destitute, with a particularly strong following among disenfranchised groups in Mexico such as homosexuals, transvestites, and sex workers. Generally, she’s seen as egalitarian in her favors, and the film makes a point of showing how such beliefs play out in worship. Go rent it. 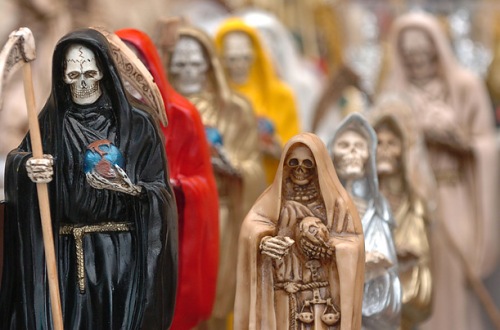 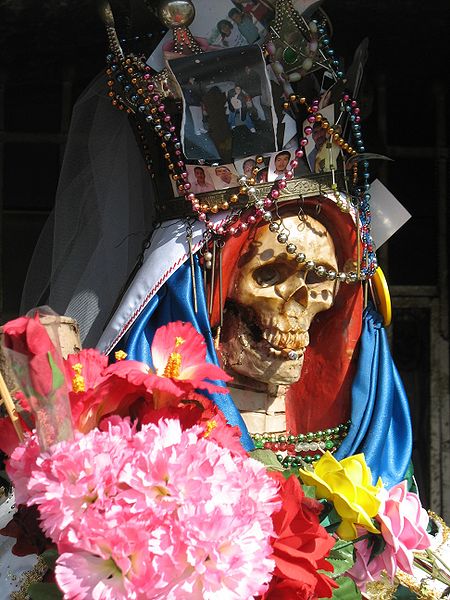 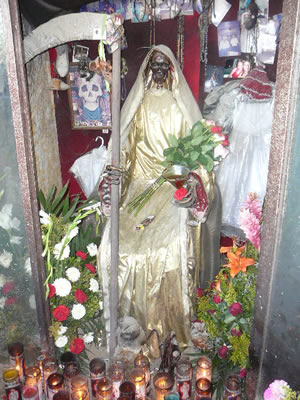 One response to “La Santa Muerte : a film by Eva S. Aridjis”